The Computer is a tool for divination....A Black Mirror

I'm convinced that my strange experiences role-playing online was a harbinger for the eternal supernatural Kingdom of God.

And if it's not a harbinger for the "New Heaven and New Earth" that the Bible speaks of....then it's either heaven or hell itself!

I'm not really sure which one because my experiences were both heavenly and hellish. But after reading "The Book of Enoch" and a few other lost books of the Bible, I know that the ancient ones believed that there were multiple heavens and hells. There were at least 7 heavens, I believe, so surely they would have seen the internet as at least one of them.

My adventure online started with my RPG Character Adam. Adam wasn't my first RPG Character but he might be the one I played the longest. I spent about 3 years living a completely different life in the parallel dimension that was the internet. And throughout this time Adam wasn't alone. He had two best friends and teammates, Ethan and Koi.

In our little fictional online world, this trio was felt like they were running things!

I had no clue, none, that Koi and Ethan might have been joined to me, that we were "teamed" together. These were just some friends I thought I met online randomly.

The story of our RPG was a high school full of people with all kinds of supernatural abilities. Everything from witchcraft, to super powers, to being genius Mecha pilots. It was basically Hogwarts+.

I myself made this high school RPG. In real life, I loved action movies, “guy” movies, and heartwarming “buddy” flicks where guys had fun pranking on each other or saved the day while dropping witty one-liners. It seemed to me like male bonding was hella good stuff!

Even though I was female I’d always wanted to experience that kind of close nit friendship with a guy. 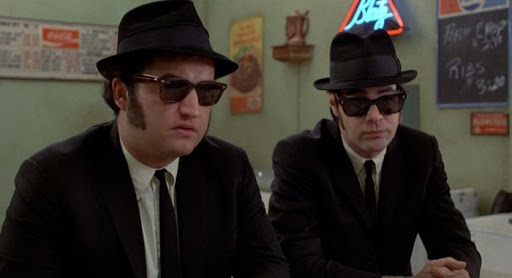 Scene from "The Blues Brothers" one of my favorite buddy movies!

And that’s when roleplaying with Ethan and Koi came into the picture. It was like I had finally gotten my weirdest wish and was part of a guy team in an awesome action anime series!

Koi was the team leader. He and Ethan had magical abilities while my Adam was a martial artist and exorcist mech pilot. Later in life I would study real exorcism and demon hunting and learn that there was in fact a lot of demon summoning and exorcism techniques incorporated into certain martial arts styles, like Tai Chi.

I didn't know all of that though back then. I just thought Adam sounded cool. And together with Koi and Ethan they made a dynamic and entertaining buddy team. All three of us were good writers and creative. Each character was distinct. Ethan and Adam, in particular, were good comedy writers. And the trio spent as much time goofing on each other as they did being heroes. It was like the "Impractical Jokers" meets "Naruto".

I played with these guys from around 1999 to 2001. The internet was still fresh and new and we were teenagers exploring this giant virtual playground, without any real idea of what this thing called “the internet” was.

But explore it we did.

Unfortunately, I found out that all though the computer was a giant glowing portal, everything in there was not centered on "light."

There is a lot of hidden danger in this dimension.

I had to find this out the hard way…

I had gone away to bootcamp for about two months to try to make something of my life at 19-20. This was around 2000-2001.  I had already flunked out of my first college and couldn't seem to hold a job for very long. I've always had fantasies about joining the military anyway. It seemed to be the only way I could become a real hero like the ones I played online.

So I bid adieu to Koi and Ethan. Ethan especially didn't want Adam to go, but I had to. Things weren't exactly good at home either...

I grew up with my mother and her mother my entire life but around the time I got ready to graduate from high school, my grandmother seemingly went mad.

She would take a baseball bat and bang it on the floor, over and over again yelling about "demons." Sometimes she swing that bat around right in front of me and smash things. It's almost funny, the memory of my little old grandma, a feisty old yellow/black woman. Swinging that baseball bat with conviction to chase out supernatural monsters.

I don't know what kind of demons she thought would be scared granny demon slayer banging her bat to drum beat on the wood floors. We lived in Brooklyn long enough to know the difference between a demons and squirrels, but I'm sure the squirrels were the only ones scared away.

She did manage to scare the hell out of her "gothy" granddaughter and cost us a lot of money in floor repair.

I might have been able to stand it if that was all she was doing but then she started accusing my mother of cannibalizing children. The final straw was when she threatened my mother slashing the air in front of her with a machete.

I was TERRIFIED and had to get away. I pleaded with my mother to get granny some mental help but I don't know, my mother seemed strangely reluctant to do that, . She seemed to almost laugh about it like she thought it was funny. She laughed hard when my grandmother accused her of cannibalism. And even though she was screaming when my grandmother threatened her with the machete she had a weird smile on her face.

I, however, found none of this funny at all. If my grandmother wouldn't get actual mental help then I needed to get away.

But like I said, I couldn't keep a job and even if I did it probably wouldn't pay enough for me to rent a place for my self seeing as how I lived in New York. Even Brooklyn was pretty expensive. I was stuck and the military seemed like my last hope.

But I didn't last very long in the military either as I got really sick while I was over there to the point that I needed to be discharged. I was actually discharged as a "311" which means suicidal. Really, I was just sick as a dog and to this day I kinda marvel how I managed to survive boot camp as long as I did. I was always coughing, day and night and towards the end I started coughing up blood.

Funny side story though, while I was in separations (which is where they sent the nutcases, homosexuals and those not physically healthy enough to stay in boot camp) I was teamed up with another sister who was deemed "homicidal". I forgot what the number code was for that (maybe 430 or something?) but together we were "Suicidal and Homicidal". I don't know I always thought that match up was funny. She might have killed me in my sleep but she still wasn't as scary as my granny.

I was happy to go home though. I hated the military though I did make some awesome friends there. I   couldn't wait to be reunited with my team again, I had missed them so much! I remember when I got back in to the chatroom, so excited to surprise my "boi's". Well, they had a surprise for me too...

Ethan and Koi were now a couple, which was odd. Koi had told me Ethan was his cousin when he first introduced him to me...hmmm...