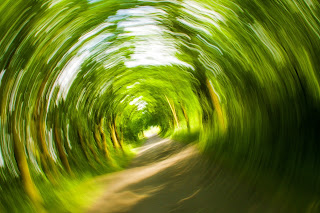 You would think turning away from evil would be easy.

In the movies, demons look ugly. They are so terrifying they split you to the core and can cause people to go insane just from the looks of them.

But I've rarely seen an ugly demon. The ones I've encountered are all the more horrific because they are beautiful. They are seductive. They will split you to the core as well by getting you to peel yourself and do the dirty work for them!

They camouflage themselves in your deepest, most intense desires.

It's really hard to say no to that. You start making up excuses in your mind of why it might be okay. Maybe even God wanted this for you.

They tickle your secrets and make you giggle in places you thought were too dark or weird to venture into. You start to think it's safe to revel in these ideas.

Then they use them against you and you're FUCKED.

Admit it though, in your heart you knew there was something ugly about this "spirit" and you shouldn't trust it...but it's hard to say no to a dream that's coming true!

And this is the predicament I find myself in...

I spent the first half of my life being heavily "protected" and kept away from other people. Though as a teen I did have friends and even a best girlfriend, I always felt lonely and "separated." I wasn't allowed to go anywhere with friends after school, though I often broke that rule even if it meant a beating when I got home. Going to movies, having a boyfriend, even going to school dances was often out of the question.

So I was kind of a lonely kid who spent most of her time in front of a book, a television or inside her own head. One of my deepest desires was to find my soulmate. Someone who was "like me" and could understand me and I could understand them.

A best friend through thick and thin. My other half.

So like a "genie*" the demon(s) gave me my greatest wish.

A best friend. The one whom I trusted and gave my heart to.

I think by now you should have guessed this story doesn't end well...

The trap they set for me seemed so innocent. One of the role-play scenarios we had before the ritual that tore us apart was that we were an old married couple just sitting on the porch...half def and old as hell, but still laughing and having fun with each other.

As a role player, I had been in all kinds of awesome scenarios. From fighting aliens to teaming up with vampires and star warriors, to fighting in giant battle arenas. But none of those adventures matched the simple, profound role I played as old "Adam" sitting on a porch holding hands with "his" life partner.

It was a role play that reflected one of my deepest wishes.

Also, one of my deepest fears is of growing old, especially at that point in my life. It might seem like a strange fear, like being afraid of hair or your own farts or something. Growing old was natural and a part of life. It was, in fact, a privilege.

But I was about 19 and watched my beloved grandmother bang a baseball bat against the floor to chase out demons, and threatened to attack my mother with a machete! The unofficial diagnosis for what was happening to her was "dementia."

I have some interesting theories about grannies dementia but well get to that another time. Suffice it to say growing old look like a ton of shit I didn't want to deal with.

So that sweet little role play kind of hit a lot of markers for me. It put a smiley face on growing old, whereas before growing old looked like something really bad...pain meds and Alzheimer's.

There can be another side of this. Simply being a comfortable, happy, old person sitting on the porch laughing with someone awesome I got to share my life with.

And soon after that role play, he betrayed me.

Like Judas, he "nailed me to the cross." It all happened online but it was profound enough that the memory was blocked out of my mind for twenty years...and now that it's come back it seems I cannot stop thinking about my old "friend."

This friend is haunting me. I'm trying to exorcise him but nothing I've done seems to get rid of him permanently.

And the more I think about him the more the black box I'm trapped in grows darker...

That vision of the two old people holding hands on the porch is my trap.

It and Adam are tying me to a very bad spirit. I wanted it that vision to be true so bad. I wanted to find my soul mate, I wanted us to have this beautiful story of a friendship turned romance. And I wanted to be able to grow old with "him."

Everytime I think of that memory I get good feelings. But this memory leads me to bad feelings too, like feeling stupid. How can you love someone who screwed you over so bad...who literally sold you to satan in a parallel dimension?

Then the memories of SRA (Satanic Ritual Abuse) come rushing in, both what happened in-game and the real world abuse that happened when I was a child.

And this all reminds me of betrayal. There's been quite a bit of that in my life.

You know how hard it is for me to shake the disease...

And these negative thoughts empower the black cube. I want out of it.

The cross. The cross of Jesus is an open cube.

I'm bloody, beating, full of hope. I will exorcise this demon.

Satan paints beautiful dreams. I have to learn...learn how to maneuver around these delusions because that's all they are. I don't know if I'll ever find a soul mate but that creature, whatever he was, was not it.

That creature was bad news and once God frees me from that menace, I will be that much freer from the black box.

In the meantime, I'm learning. Growing wiser in the ways of the hidden world every day.

So hopefully, I will be able to teach my fellow humans whatever I know.

*A "Genie" by the way is a "Jinn," a demon. Genie is also the root of the word "Genius." Genius comes from having a Jinn/Geni.