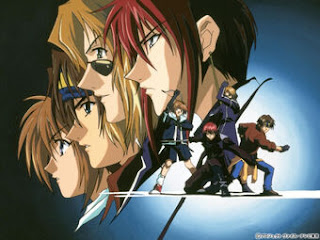 Weiss Kruez is not the best Anime out there.

But Weiss Kruez does have the most affective Beta (Male) Sex Kitten programming I ever seen.

The show itself doesn't show much sex in it, at least nothing too explicit that I can remember (it's been twenty years since i've seen this series). But this cartoon has a "spirit" about it that just "switches on" things in people that probably shouldn't be switched on.

It switched things on in me and my online friends. We started watching the series and immediately started acting out gay role plays with each other involving the male characters.

Two of us were females who enjoyed playing male characters. Yes, just like how heterosexual males like to see lesbians together sometimes heterosexual females can be the same way about seeing two handsome young men together.

One of my friends might have been a guy pretending to be a girl...but that sordid mess well talk about another day.

Either way, me and my two online besties started acting a bit strange as soon as we started watching this show.

And its not just us, look up some of the fanart and fanfiction for this show. Lots of playings around with upside down crosses and homoeroticism.

It's just the "spirit" of this show that encourages this response out of people:

And it won't take long for you to run into some dark homoeroticism when looking up fanart for the show:

I'm not trying to embarass anyone by pointing these things out. I use to be a fan of the show and even wrote some fanfiction about it myself. I also use to enjoy some light Yaoi stories and read Slash/Yaoi fanfiction. My deviantart page is still online, somewhere, and might have some incriminating evidence of a girl who likes watching gorgeous guys fondle each other.

But getting back to the Beta Sex Kittens, I should mention that the characters codenames are all cats.

Just like in Beta Sex Kitten Programming. The 4 main heros all have cat alters.

The story is these four guys (3 adult males and a teenage boy) are all assassins. Their codenames (Cat Alters) are:

So yeah. Their all named after cats. Sex kittens.

People wonder how Beta Sex Kitten programming works with male slaves. Weiss can show you how. Watching this show attaches a strange spirit to people that can make some people act out.

Switching things on in people that maybe should not be switched on.

There's much more to discuss about this in part 2